I want to thank everyone for keeping their attention on ending human trafficking.

It is a major issue for humanity to fix.

Well, END HUMAN TRAFFICKING on Telegram shares a lot of articles and news about different human trafficking arrests and other stories related to it.

I think they have their channel settings set on private, because I can’t embed their posts, so I have screenshots below and the info they shared.

Here are a few posts they have shared recently…

Dennis Chabot, 68, was due to appear in Rutland criminal court Monday on a single felony charge of repeated aggravated sexual assault after having been extradited last week from Massachusetts, where prosecutors say he was arrested.

James Eschert, 51, was arrested in January by police in Plymouth, Connecticut, and faces five charges of risk of injury along with two charges of fourth-degree sexual assault. School system officials all but ignored the complaints. At least four of them have now been arrested and charged with failure to report the allegations.

Robert D. King, 41, of Cave City was charged with 10 counts of second-degree sexual assault and one count of refusing to submit to arrest, according to police. An investigator from the Arkansas State Police Crimes Against Children Division began investigating King on Mar. 30, after receiving a case file that included interviews with the victim and two other children.

Detectives say the juvenile victim disclosed that they had become involved in a relationship with 38-year-old Michael J. Conner, Jr. of Reading, beginning with communication between the two via social media accounts.

GARLAND, Utah – Patrick Green, 59, who taught second grade at Garland Elementary School before he was placed on administrative leave in September and officially terminated from his position on Monday, is facing four counts of aggravated sexual abuse of a child. According to a probable cause statement, Green sexually abused two female students this year and last year.

Melvin Tucker III, 34, of Dundalk, was charged in 2021 with allegedly sexually abusing at least one child as a coach for the Arbutus Recreation Council youth baseball program. Police said at the time they believed there could be additional victims and asked anyone with information to contact detectives. Online court records now show three separate criminal cases for Tucker, with different dates for when the criminal offenses allegedly occurred. Two allegations are from 2018 and one is from 2006, according to online court records. 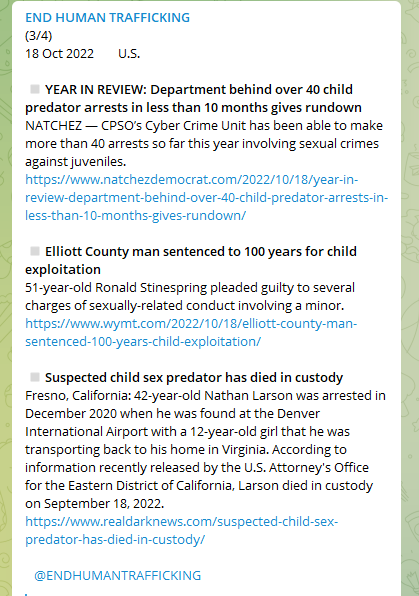 YEAR IN REVIEW: Department behind over 40 child predator arrests in less than 10 months gives rundown

NATCHEZ — CPSO’s Cyber Crime Unit has been able to make more than 40 arrests so far this year involving sexual crimes against juveniles.

Fresno, California: 42-year-old Nathan Larson was arrested in December 2020 when he was found at the Denver International Airport with a 12-year-old girl that he was transporting back to his home in Virginia. According to information recently released by the U.S. Attorney's Office for the Eastern District of California, Larson died in custody on September 18, 2022. 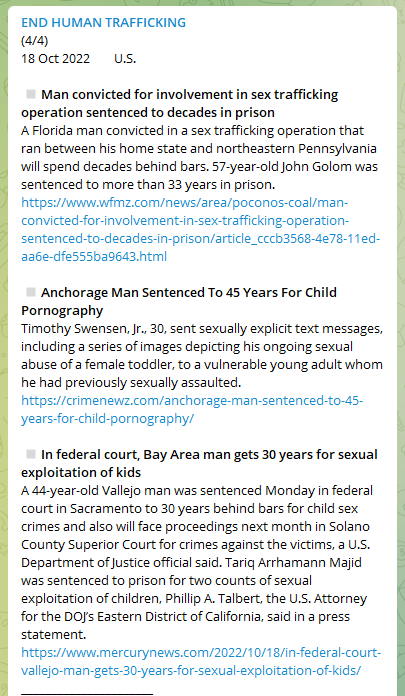 A Florida man convicted in a sex trafficking operation that ran between his home state and northeastern Pennsylvania will spend decades behind bars. 57-year-old John Golom was sentenced to more than 33 years in prison.

Timothy Swensen, Jr., 30, sent sexually explicit text messages, including a series of images depicting his ongoing sexual abuse of a female toddler, to a vulnerable young adult whom he had previously sexually assaulted.

In federal court, Bay Area man gets 30 years for sexual exploitation of kids

A 44-year-old Vallejo man was sentenced Monday in federal court in Sacramento to 30 years behind bars for child sex crimes and also will face proceedings next month in Solano County Superior Court for crimes against the victims, a U.S. Department of Justice official said. Tariq Arrhamann Majid was sentenced to prison for two counts of sexual exploitation of children, Phillip A. Talbert, the U.S. Attorney for the DOJ’s Eastern District of California, said in a press statement.

I’m sure there is much more as well!

Thank You For Staying Informed & Sharing This Information To Help Others WAKE UP To The Truth Of The Real Pandemic!