What’s So Strong About the US Dollar? 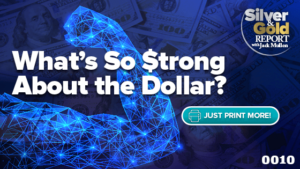 All the major currencies of the world are circling the toilet bowl. This is a good analogy because all central banking currencies are intertwined, confined to the model in which they were created (bowl), and all of them are collapsing in terms of real purchasing power.

Currently, the USA holds the “world's reserve currency” title and is the go-to currency when other investment assets get risky. Global debt “financial assets” are selling off, causing dollar purchases based on supposed safety. According to Deutsche Bank:

Global bonds are now in their first bear market in 76 years, after having dropped 20% from their peaks, according to Deutsche Bank research dating back to 1786. The last time global bonds fared so poorly was in 1946, the year that the first session of the United Nations was held in London after the end of World War II.

All global currencies are debt-based (theft currency) and are hardwired to the debt market. Fiat currencies, like the stock market (now), do not derive value from intrinsic worth but are valued as a derivative of the debt markets.

When debt is low, and confidence is high – currencies acquire short-term value measured in terms of REAL buying power.

When debt (measured by the interest payments outstanding) becomes high or, as in the current situation, extremely high, confidence in the system falls, and currency purchasing power collapses.

Inflation and stability in the debt markets are related in the same way.

When market-wide debt is low and currency in circulation is consistent with goods in the market, purchasing power is at its highest.

When debt becomes high and the total amount of currency in circulation becomes elevated, inflation appears as buying power is diluted by an increase in currency in the system.

When markets become unstable, the number of currency units is exceptionally high, and its buying power is diluted. More and more debt must be issued to keep the market liquid and existing debt interest payments serviced.

Inflation is not caused by rising prices (in general) but rather by increasing debt, i.e., the dumping of more and more currency into the system, which demands even more currency to accommodate interest payments on new currency introduced by borrowing.

But remember, debt-created currencies were designed to create interest payments because they are borrowed into existence. Thus borrowing increases the number of currency units in the system (inflation) –  and requires additional currency to provide for new interest payments necessary to support that new currency (liquidity is paramount). Therefore, additional borrowing is required to satisfy liquidity requirements – an endless upward spiral.

Now, back to world currencies. When we hear phrases like the US Dollar is very strong, or the private banking cartel called the Federal Reserve claims they support a “strong dollar policy,” – they are not talking about the dollar rising in absolute purchasing power. What they are referring to is the model-based fiction that compares the buying power of the dollar (or any of the other currencies) to all the other currencies in a collection of currencies called a basket.

A “strong dollar” comes at the cost of purchasing power of other currencies. When the dollar rises relative to, say, the pound, it's because people are selling pound sterling and buying different things, including the dollar. It is a flight to the better failing currency.

Clearly, the absolute buying power of the dollar and ALL other currencies of the world are collapsing. This does not have to be confusing or require a Ph.D. to understand.

A corrupt banking empire controls world governments.  “Money” created out of “Nothing At All” is the grease in the pockets of politicians and the common person alike.

Government borrowing, including national, state, and local governments worldwide, is at all-time highs.

The amount of debt is staggering and impossible to understand from the point of view of the human mind.

According to the IIF:

In 2021, global debt reached a record $303 trillion, according to the Institute of International Finance, a global financial industry association.

That's three hundred thousand billion dollars, each requiring interest payments until the money is returned to the Federal Reserve (paid back). How can one even think about that number?

So to wrap up the “strong” dollar conversation and to make sense of the current monetary situation: understand that debt-based currencies were intended to steal wealth (wealth transfer) and to eventually cause a financial collapse – on schedule – to support the introduction of a massive societal transformation.

The Massive societal transformation is designed to eliminate the Western middle-class lifestyle and force all people into the category of financial slave.

Wells Fargo House Buyers Market Sentiment has fallen for the past 8 months out of 100; August came in at 49. The survey essentially indicated that 79% of the respondents believe this is the wrong time to buy a house.

Foreclosure rates are up over 200% in 2022, and we can expect that to continue to rise as homeowners go “underwater” with their mortgage loans (due to price collapse).

During “covid” landlords were prevented from evicting tenants (as they lost their jobs to “covid” policies). That has ended, and inflation is causing large numbers of evictions in the home rental market, forcing some landlords to sell their rental properties because of rising interest (ARM) and tenants are no longer available.

And, so-called “Non Qualified” Home Mortgage lenders are going bankrupt while the number of people applying for the loans is rising.

Automobile repossessions are rising after the wave of “covid” buyers stopped getting their monthly checks.

Banks are holding on longer to “repos” as auction buyers dry up, setting the stage for large write-downs to move the inventory off the books.

And like new cars, the used car market shows signs of collapse.

The pandemic created an unprecedented (and unsustainable) bubble where used car prices rose by 42% since December 2019. Like all bubbles, prices will inevitably come crashing down. Here are three signs that the used car market crash is coming.

Gold and silver: prices were down for a short period, but over time they absolutely must and will rise.

Silver: supplies continue to fall at the exchanges, leaving SLV and other silver paper assets without an adequate supply of physical silver backing the paper.

The collapse of the monetary system was planned in 1913 and then updated in 1971 with the closing of the gold window for redeeming dollars – we are now in the final days of this plan.

We cannot stop this without completely repudiating the federal debt and total debt forgiveness for homeowner/consumer debt. This is not likely to happen.

The dollar is not strong in terms of absolute purchasing power, which continues to fall daily. Look at how much food $50 buys today and compare it to last year. It requires more than $30 to purchase what a dollar bought in 1913. Therefore a $100 purchase in 1913 would need $3000 today.

So the dollar will have to go – along with the rest of the debt-based theft currencies. But we can replace it with honest money in the form of competing currencies, silver, gold, and other mutually agreeable mediums of exchange.

We must become our own bank and reject the idea of central banks. And while the system collapses, we can be prepared with food, water, silver, gold, farmland, farming tools, weapons for self-defense, new skills, and more.

Remember, the time will come when international bankers try to move Americans to a new “digital currency.” This will be introduced to fix the massive destruction of financial wealth caused by the collapsing monetary systems. When that happens, we must be ready with a resounding “Hell No” and be prepared to defend that decision.

See ya next week.

** Ideas and suggestions contained within this article are my own opinions and are not intended to be financial advice.