Out Of Nothing At All: Central Banks Continue To Destroy The Middle Class 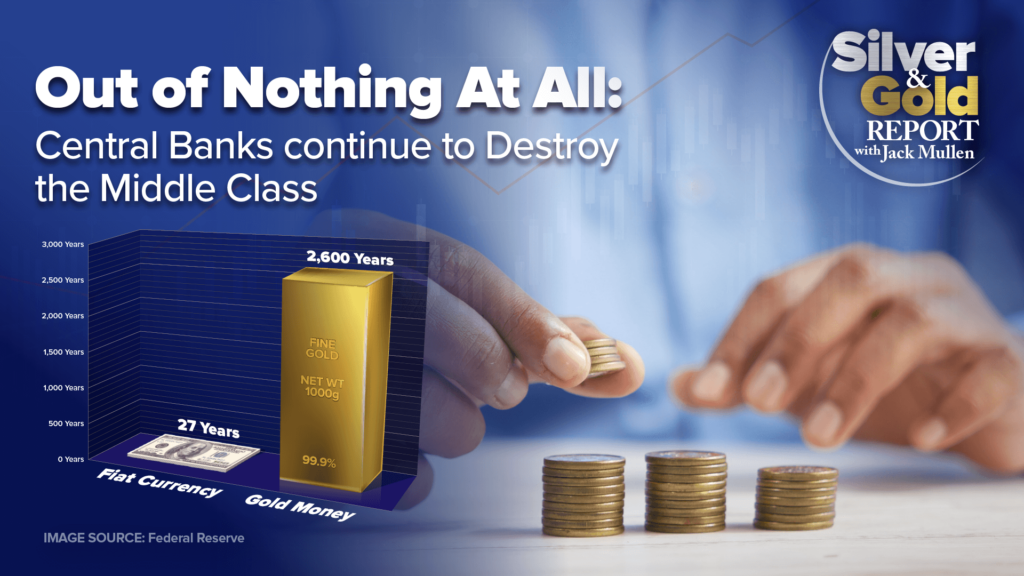 If debt is the problem, how is raising the debt ceiling the solution? -Ron Paul

There are no free markets, only managed markets controlled by a collective of global entities using AI software to buy and sell assets at near light speed.

Over the course of the past 40 years, the American financial system and the dollar have been used by the “market managers” to transfer wealth from those investing, holding, and doing business in dollars to a global control operation that is now finalizing their work: managing the demolition of the dollar-based economy and preparing for a painful introduction of a new monetary financial system.

The new system will not favor the individual and is not created as a means of facilitating merit-based free trade in a market that creates products for making life easier and happier for individuals. It will not be a financial market that rewards good ideas and punishes bad and painful ideas.

The new financial system is designed to favor its owners and will categorize participants as financial units – workers – acting as components in a financial clockwork, serving the controller's interests by tracking, patronizing globalist merchants, and issuing punishments while offering only minimal uses for “workers” – such as purchasing food and necessities.

We are in the final weeks and months of monetary demolition and the signs are all everywhere. Central bankers are busy flooding the economy with currency – even as currency velocity (called money velocity) continues to move toward historic lows.

Gold and Silver are under pressure, but silver is still holding above $19.00.

The 10-year yield continues to climb and is above 3.56% as I write this article.

The stock market is a derivative of the debt market and rising interest rates are creating a risk-off environment as investors seek refuge for their dollars and move to cash or other stores of value.

A side effect of currency destruction caused by inflation is rising crime rates and lawlessness and we observe that crime is soaring in cities across the USA.  Rising crime is causing brand name companies to close or curtail retail outlets due to crime in their stores.  McDonald’s CEO warns of soaring crime in Chicago: ‘Our city is in crisis. Philadelphia Grave Diggers Cannot Keep Up With Murder Rate. In other cities, stores are no longer remaining open at night and cut hours during the day to reduce theft.

Americans are becoming further and further behind, borrowing more and more money to keep up. In July, consumer debt rose to an all-time high, surpassing $16 trillion – up by more than 13% over last year.

Inflation is fueling even more debt among the middle class, who continue to borrow to maintain their standard of living. Recent numbers from the Federal Reserve Bank of New York found that, between the first and second quarters of 2022, Americans' collective credit card balance rose 5.5% to $46 billion.

As inflation continues (excessive currency printing via the private Federal Reserve) upwards, the price of purchases made with a credit card is increasing.

Externally, the housing market, 30% of the US GDP, is collapsing and home builders lower prices for the ninth straight month as sentiment falls.

Corporations are suffering and major players like Amazon and FedEx are downsizing operations.

Coming Wednesday, the Federal Reserve, a private banking cartel, will symbolically raise interest rates again, claiming they are “fighting inflation”, but this is not the truth.

The Federal Reserve and other Central Bankers in the West are busy increasing inflation through continuous purchases of debt. The purchases are necessary to maintain a slow and methodical increase in interest rates and not a nonlinear explosion in the rate.

Rising liquidity issues pressure the market for more currency as so-called money velocity falls. Money velocity is how fast money is changing hands. Currently, people do not have funds to spend and others are holding on to cash for safety during banking collapses that are sure to follow.

Liquidity is paramount in an inflationary market and we can expect more currency created “Out Of Nothing At All” to be pushed into the system, causing short-term reductions in interest rates – but this is an unsustainable solution for preventing the full-on collapse being engineered now.

The man who does not believe in miracles makes it certain that he will never partake in one. -William Blake

We cannot prevent the great reset using the same rigged system to fix itself. We must be optimistic that when the Central Bankers collapse the current theft-based monetary system – we will have the opening we have been waiting for – our chance to remove the bankers and the central banking cancer.

We must replace central banking with a free market monetary system that depends on competing currencies for exchange and returns the individual to control of his own resources – becoming again his/her own bank.

Man himself in part creates the conditions under which he lives and is not merely the impotent prisoner of circumstance – Lewis Mumford.

I recommend moving out of the cities and moving any assets based on dollars you have available to tangible, hard assets of many kinds. Tools, farmland, skill acquisition, solar and personal wind power systems, self-sustaining water systems, seeds, farm animals, self-defense platforms, and more.

For purposes of maintaining the purchasing power of your current dollars, consider buying silver (the world’s most undervalued asset) and gold. Buying so-called junk silver (pre-1965 dimes, quarters, and a half dollars) is a great way to easily have small denominations of silver for exchange post-collapse.

** Ideas and suggestions contained within this article are my own opinions and are not intended to be financial advice.

The dollars in your bank account or 401(k) are NOT worth what they were just a few years ago! Find out how to protect your life savings...

And the US national debt has reached the point where continuous borrowing is required just to service debt. Inflation will continue to rise from now on.  Silver and Gold WILL preserve the purchasing power of your dollars. Learn more now!

Did you know that inflation is nearly 9% and rising?