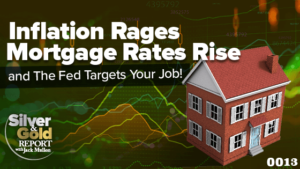 Man is buffeted by circumstances so long as he believes himself to be the creature of outside conditions, but when he realizes that he is a creative power, and that he may command the hidden soil and seeds of his being out of which circumstances grow, he then becomes the rightful master of himself – James Allen.

It should be clear now for those reading these reports that I believe that the controllers in this world, high above the puppet governments, are deliberately destroying the financial system and, by extension, the world's economies.

Western economies are the target of destruction because they are the so-called first-world economies and still control the current financial/economic and social paradigms. After the West falls, the rest of the world will come online very quickly.

Remember, I explained that Rate Raising Is Not Going To Stop Inflation in my article Central Banks Marching World Currencies off a Cliff: Finalize Your Preparations Now.

Raising rates into a free-falling economy has only one purpose – destruction.

Behold, I stand at the door and knock…

After the financial destruction, there will be catastrophic suffering for most uninformed people, including heavy loss of life among those least prepared. It is at this time the suffering people will plea for help and demand the restoration of a “safe” and stable world.

Those that caused this destruction will have been waiting to answer that call for help.

The so-called globalists have already documented their plans through books like the Great Reset and the 4Th Industrial revolution.

It will remain the responsibility of educated people to stand up and fight the central bank's digital currency slavery system. We must fight to prevent the loss of individual sovereignty and restore nations based on self-responsibility, personal charity, and reality-based societies.

Jobs Be Damned Rates Must Rise

If central banks worked honestly to reduce inflation, they would drastically reduce spending, and bank reserve requirements (currency retained by the banks to meet unexpected withdrawals) would increase.

Current bank reserve requirements are ZERO. Banks are not required to keep reserves during rising inflation and growing liquidity concerns. I believe this is deliberate and done to destabilize banks and support rising inflation.

However, like Don Quixote, the Fed continues to slay windmills rather than inflation.

We haven’t yet made meaningful progress on inflation,” Christopher Waller, a Fed governor, said during a recent speech.

As the Fed contemplates its subsequent rate increase, small and medium businesses in the United States are, at best, struggling and many are closing their doors.

If unemployment goes up, that’s unfortunate. If it goes up a lot, that’s really very difficult, Evans said. But price stability makes the future better.  – Fed board member Evans

The federal reserve's inflationary policies (including raising rates) are killing the economy, finishing the job of the deliberately evil Covid19 lockdown and deadly vaccines.

Others calling for further destruction of the jobs market include IBM vice chairman and former Trump economic advisor Gary Cohn: We’re going to have to see job destruction if we’re really going to see inflation be curtailed [emphasis J.M.]

Significant job losses are something Wall Street has been bracing for in recent months. At the Federal Open Market Committee press conference in September, Fed Chairman Jerome Powell warned that the jobs market will have to suffer for consumer prices to fall. – ibid

Currency printing without the backing and constraint of some form of real-world asset is a confidence game. A confidence game is the floating of an idea, the substance of which exists only in belief reinforced with hope. It is successful only as long as the “mark” (the uneducated American) continues to believe.

The U.S. dollar lost its primary connection to a real-world asset (gold) in 1971, loosely transferring that connection to another idea – the petro-backed dollar. This connection was also just a belief and offered hope that the dollar would maintain its purchasing power. The problem, however, is that the dollar is not redeemable in any fixed amount of oil, and its purchasing power collapses as inflation exposes the confidence game.

As people lose “faith” in the dollar, backed by nothing, its purchasing power will plummet quickly, money velocity will increase, and trillions of dollars will attempt to make purchases before the dollar is destroyed finally.

The symptoms of loss of dollar confidence will be massive debt selloffs, which is seen now in the rising interest rates of debt-related products. The 10-year yield is now over 4%; the stock market is falling, and temporarily gold, silver, and oil prices are dropping.

When the debt market begins to melt down, liquidity in the system will dry up, demanding more borrowed money to meet short-term currency needs – which is inflationary and acts as a positive feedback loop. The Bank of England recently began emergency purchases of debt, and it is clear from 10-year yield fluctuations that the Fed has been buying debt. It appears they are now attempting to do so publicly.

U.S. Treasury asks major banks if it should buy back bonds.

The U.S. Treasury Department is asking primary dealers of U.S. Treasuries whether the government should buy back some of its bonds to improve liquidity in the $24 trillion market.

Liquidity in the world's largest bond market has deteriorated this year partly because of rising volatility as the Federal Reserve rapidly raises interest rates to bring down inflation. -ibid

I have written in my previous article about the collapsing automobile markets (new and used). We also see more than a doubling of repossession in 2022 over the average for the past several years.

Something is happening behind the scenes. The Federal Reserve (a private company with no reserves) is busy destroying the economy by raising rates into a recession soon to be depression. The debt market is selling off, yet there is no mainstream notice of the battles behind the scenes to prevent liquidity lockup and complete collapse of the debt market. All the while, prices keep rising.

Silver supplies continue to fall as silver stocks are delivered and removed from the major exchanges. We are also seeing declining activity in long-term paper silver futures contracts, while supplies are not keeping up with demand in the real world.

Remember that silver and gold premiums are rising and continue to preserve purchasing power.

Silver Eagles are selling at $36.95, showing a premium of 100.81%. We are seeing the actual physical market reacting to the ridiculous managed spot price.

Mortgage rates are currently rising by over 7%. It is getting harder to qualify for a loan.

A significant bifurcation point will soon separate people who have prepared for the financial collapse and the destruction of the American middle class and those who have not.

Silver, and Gold, offer a way to protect some of your liquid wealth and, when combined with other preparations, can provide a way to become your own bank. These metals can provide the means to support yourself and your family as you resist the coming digital currency slavery and stand ready to take back and rebuild our civilization.

Please note that the so-called “Junk Silver” is a fantastic way to own fractional silver and carry and use silver in a familiar, safe manner. Please see my new article, What is Junk Silver and Why You Should Buy Some. In this article, I explain how to price and buy “junk silver” and why it is a good idea to get some – oh, and get it soon.