A unique and “extraordinary” set of economic conditions is steering the globe towards a crisis worse than any of the stock market crashes or energy shocks of the last 70 years, Elliott warned in a recent letter to clients, the Financial Times reported Wednesday. –MSN

The prices of all necessities have been rising, and food is among those necessities. Food prices have been increasing over the past year and recently appear to be growing in a hyperbolic (nonlinear) way. 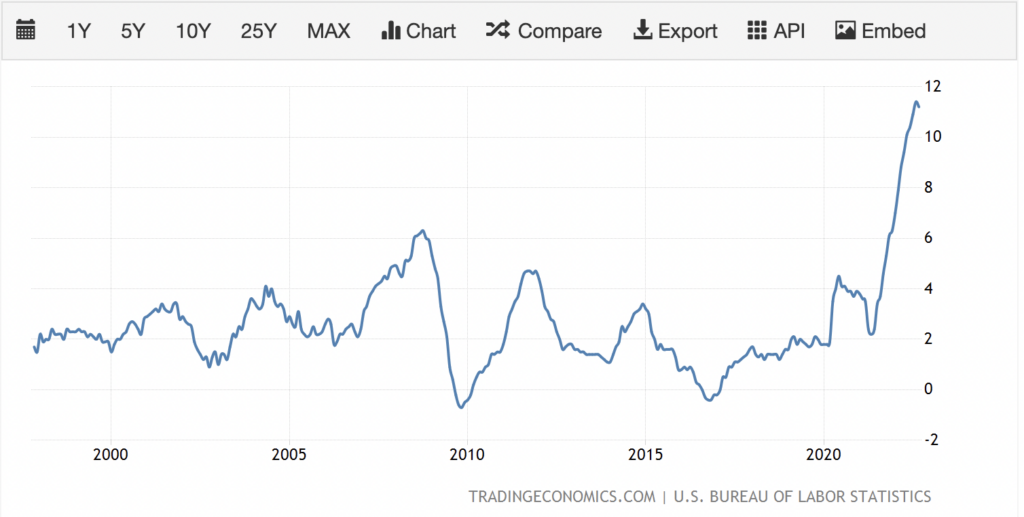 The chart above shows food inflation in the US since 1999 and the rising inflation rate (year over year) as of September. It is estimated that food prices will continue to rise into next year.

The situation in the UK and Europe is even worse for food prices, which signals what can be expected in the US;  if diesel fuel shortages stop trucks, we can expect even higher prices for all goods delivered.

According to the Guardian, UK food prices soar by fastest rate on record as cost of living crisis bites; food price inflation soared to a record annual rate of 11.6% in October.

As inflation rises, returns in the stock market are not keeping up with inflation, and it is typical for the market to fall as equities are sold. The proceeds from the sale are moved into purchase power-preserving assets. Assets such as silver and gold and debt products are often purchased when inflation rates rise. In the chart below, we can see the stock market losing ground as inflation increases. 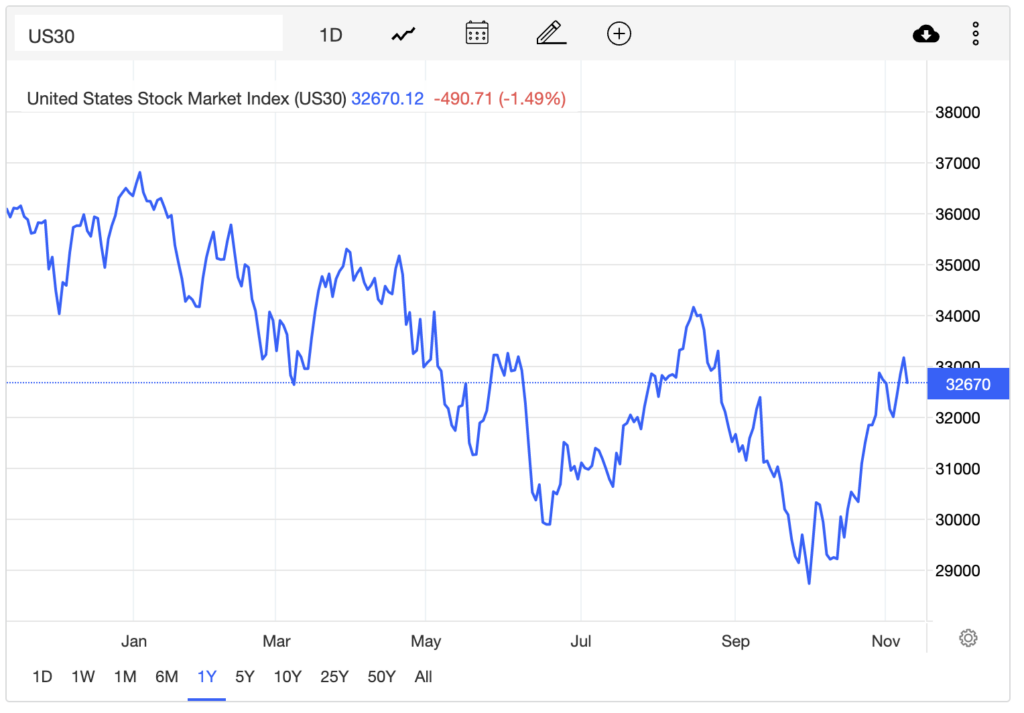 Inflation, in general, is an apparent increase in prices paid across a broad range of products priced in a currency, such as the US Dollar (USD).

But inflation is not caused by goods and services costing more, except in the case of shortages, rising tariffs, or other exceptional cases. But instead, increasing prices paid in a currency like the USD result from an increasing supply of currency.

Massive spending using currency created out of thin air and introduced with interest charges is the primary reason prices are rising now.

Over the past five or more articles, I have provided educational materials for those wishing to understand how our monetary system works, how currency is created, and why the currency is not money but is a money substitute.

According to John Williams' ShadowStats.com

The more-liquid the Money measure, at present, the greater the growth and the greater the upside pressure on inflation. Nothing like the recent creation of, and FOMC fueled growth in “Basic M1” has been seen in modern US Monetary History, and the resulting headline Inflation and continued suppressing reporting gimmicks in the US CPI calculation, already are pushing historic bounds — intensifying, not softening as per some recent happy headlines. [emphasis JM]

As we can see, the “basic M1” chart indicates a parabolic rise in currency creation which will directly drive inflation upwards. This massive growth in money supply can be explained as, I detailed in my article Economic Iceberg Spotted Ahead: Why the Economy Will Collapse,  the end of the designed life span of the wealth-stealing debt-based currency called the US Dollar.

At this stage of a debt-based currency life span, the amount of debt accumulated, denominated in dollars, is reaching the point where servicing interest alone is consuming large amounts of the circulating currency. For the monetary system to continue, more debt must be created until the point is reached when no amount of new debt can provide enough liquidity.

Raising interest rates will not combat this inflation. For inflation to be controlled, a new monetary system must be built that does not employ debt-based currencies.

The Federal Reserve is an agency of the controllers working to create a One World Government. They are a privately owned banking cartel that serves the interest of those making the New World Order and do not serve the interest or well being of Americans.

I am providing this information for those who understand that this economy's destruction is the outcome central bankers and their owners are seeking.

No wishful thinking can save the dollar. Therefore, it's up to each of us to take personal responsibility for our wealth and its protection.

In the same interview, Fitts said the following regarding what is taking place at the level of the corporations (Federal Reserve & others) that control our world.

It's a financial coup. Right. So you issued debt. And remember the people doing and control the government bank accounts, they're the depository for the government. So you issue debt, and then you take the money out the back door, so the government is left with the debt, and you get the assets. You know, so So imagine, you're, you know, you're the New York Federal Reserve Bank, and you and your members are running and controlling the federal government accounts and you're also selling the Treasury securities. So you're selling the debt securities, you're putting the money in the bank account, then the money is disappearing out of the bank account. It's it's basically a bank robbery. But it's a coup. It's a change of control by financial means.

The enormous cash flows moving back and forth from the money markets to the fed are another sign of growing instability. These rivers of currency are symptoms of inflation, and falling returns on cash as the fed becomes the backstop for funds staying away from the bond market.

According to Zell, the move to “flood the world with money” has set us up for a liquidity crisis.

The demand for gold has increased across all sectors except for paper gold and silver contracts like shares of ETFs, where demand is falling. This indicates that gold buyers are not interested in paper promises but want only physical gold.

The same story holds for silver, and stockpiles of silver continue to fall on the major exchanges as physical metals are purchased and then moved out of the West toward the East (India), where demand is producing higher premiums and greater returns for silver sales.

Central banks globally have been accumulating gold reserves at a furious pace last seen 55 years ago when the US dollar was still backed by gold. According to the World Gold Council (WGC), central banks bought a record 399 tonnes of gold worth around $20 billion in the third quarter of 2022…

Central Banks Are Buying Gold As A Zombie Apocalypse Hedge:

Central banks and rising physical gold demand is a historically accurate signal that inflation and purchasing power collapse is undermining the paper currency. With the destruction of purchasing power comes the loss of faith in the un-backed currency.

Meanwhile, be prepared to hold on to your gold and silver in the event of confiscation, similar to 1933.

And if more losses need to be covered than the current gold revaluation accounts of European central banks allow, the ECB will need to revalue gold.

Revaluing gold was done in 1933 after FDR announced that gold was illegal to hold and must be turned in – with fines set at $10,000 for not handing over gold. Those surrendering (not the majority of people) their gold were further insulted when the government reset the gold price to $35 per ounce up from $20 at the time of confiscation.

* See my previous articles for why silver is my choice as the primary monetary metal.

Carvana is likely to go bankrupt as revenues fall 31% lower in Q3-22 compared to Q3-21. With average car profit down 25%, Carvana share prices have fallen drastically and stood at just under $8 at this writing.

Carvana is a used car dealer with a heart on record of overpaying for low-quality automobiles and poorly managing their franchises such that they have lost their license to sell cars in several states. The collapse of Carvana will push thousands of cars into the market at lower prices, further deteriorating prices.

Car Repos are reportedly flooding the market, and lenders holding the repos are still keeping the inventory at prices higher than the market. Used car values are falling at 1%+ per week, which will soon affect lender balance sheets.

The real estate market continues to fall month over month, with September being the 3rd month. Analysts expect that housing will see its most significant decline since the 2008 recession.

Supplies of registered silver continue to fall at the major exchanges, and mints cannot keep up with demand. Further, Mints and Miners cannot supply the blanks and raw materials to keep up with silver coin demand.

* Note on the 10-year yield. The yield has been pushed down more than 20 basis points (signs of enormous debt purchase volumes) and then quickly rising as much or more over just a few days. This massive change was done under the pretense that inflation rose less than forecast — inflation still rose, and their projections are always high

The slow march to the finality of the US monetary system is beginning to accelerate. Meanwhile, the captured enemy mainstream media paints propaganda pictures of the Federal Reserve battling inflation and happy talk about an economic recovery that is not going to happen.

In these remaining days of 2022, please take some steps to prepare for the collapse of dollar purchasing power and be ready to stand against a new digital currency system designed as a prison identification card.

Take the time to listen to the interview with Catherine Austin Fitts above and hear her explain how the central bank controllers decided in 1998 to stop providing social security and a stable currency to an aging society and instead planned to fund ways to reduce life span.

And, and they, as soon as the budget deal fail, they proceeded to move forward with a huge number of policies, which I believe, essentially, they made a decision, okay, we can't increase the savings to the retirement fund, but we can do a series of things that will reduce life expectancy. IBID

This should make it plain that it's time to stop believing the government and its agencies are working on our behalf. They are working to keep the people pacified while their depopulation agenda has time to work out – think about the covid vaccines.

Finally, I will repeat my suggestions for basic preparations:

Please note that so-called “Junk Silver” is a fantastic way to own fractional silver and carry and use silver in a familiar, safe manner. Please see my new article, What is Junk Silver and Why You Should Buy Some. In this article, I explain how to price and buy “junk silver” and why it is a good idea to get some – oh, and get it soon.