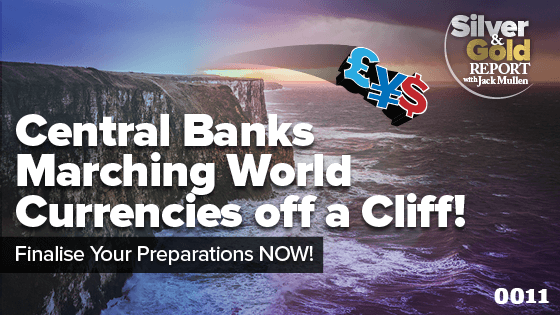 It's not elected bodies that work tirelessly to enslave humanity; it's governments cooperating with private corporations, including a fully captured media and the money interests that control them. Today we are living through a period that will someday be called “the Great Currency Collapse.”

While the captured media babbles on about dollar strength and praises the performance of the stock market, a group of bankers and corporate controllers pretending to be associated with elected governments continue to undermine the already weak paper (fiat) currencies using the oldest trick in the book – hyperinflation.

Today's events are not random and are not natural or the result of good men making bad mistakes. We are seeing the herding of Western civilization toward the slaughterhouse of complete financial collapse.

Financial collapse is where individual wealth has been secretly transferred to central banks. And moved away – lost in derivative wealth sinks, such as stock and bond markets, pension funds, and overpriced housing, and stored in privately issued chits sold to us as national currencies, which massively collapse purchasing power.

The financial collapse has begun, and the death knell of the doomed US Dollar and the other privately issued national currencies in the West has sounded.

The violent movement of bond yields and the sudden intervention by the Bank of England (and by induction of the private Federal Reserve) to buy more aggressively all the debt offered is unprecedented in modern times.

The sudden loss of 40 basis points (4% to 3.6%) in the 10-year yield shadows a fantastic behind-the-scenes emergency buying frenzy that's sending new dollar chits into the market like an open fire hydrant releasing water on every corner of the USA.

Debt acts like a sponge in money markets as it collects currencies in exchange for long-term maturing debt instruments; it scrubs the cash out of the system and reduces inflation. When the debt market fails, and central banks begin triage by buying back the debt – currencies then flow back into the system, increasing inflation.

And this is what just happened in England as pension funds began to receive so-called margin calls from frantic lenders needing funds to increase borrowers' collateral – immediately causing a potential collapse of pension funds held for investment. See Bank of England forced to intervene to prevent a bond market meltdown

Preparatory Rhetoric Prepares the Mind For What Comes Next

And if you dig into street-released rhetoric from all the “approved” channels, we can infer the stage is being set for the final scene of this long, drawn-out play. The official destruction (deliberately) of Western civilization and recreation of a new, radically different societal paradigm. [This is the plan of the Great Reset]

Rhetoric like this is found in an article titled UN warns of a global recession as countries race to lower inflation:

“The real problem facing policy makers is not an inflation crisis caused by too much money chasing too few goods, but a distributional crisis with too many firms paying too high dividends, too many people struggling from paycheck to paycheck and too many governments surviving from bond payment to bond payment,” Richard Kozul-Wright, director of UNCTAD's globalization division, said in a statement.

The UN is one of the seats of the unlimited wealth-holding technocrats and misanthropes that designate themselves as directors of world policy and oracles of morality and social enlightenment.

Klaus Schwab is one of those technocrats involved in the self-named and self-authorized World Economic Forum. This shady group of manipulators pretends to be concerned about the overall well-being of the people of Earth but, in reality, is one of the organizing groups planning the worldwide prison and slave culture described, in part, by the Great Reset mentioned above.

Similarly, “economic authorities” are laying blame on the Federal Reserve, claiming the Fed is “Breaking things” and is causing havoc in currencies around the world.

The “Fed is now in overdrive and this is supercharging the dollar in a way which, to us at least, was hard to envisage” earlier, he wrote. “Markets may be underestimating the inflationary effect of a rising dollar on the rest of the world.”

If this is confusing and you want to understand, please read my previous articles, where I talk about the above ideas, including further references.

Money Velocity and The Canary In the Coal Mine.

Money velocity is a little-talked-about phenomenon that is associated with inflation. In simple form, the velocity of money is a way to talk about how quickly money changes hands. For example, if financial markets are stable, meaning interest rates are stable and people are living well enough within their current income situation – currencies will slow down. In this scenario, no emergencies require spending, and people can even relax and put some cash (called money) into savings accounts.

But, during times of rising inflation and zero savings, with wildly varying interest rates, accompanied by enormous growth in the money supply (money dumped into the system via buying debt or for delusional spending programs such as the Inflation Reduction Act), money (currency) will spend less time resting. That means more time changing hands – moving from emergency to emergency.

In inflationary times, households must pay more for everything – requiring reductions in their savings which are then placed into the market as spending. This process increases as prices rise because people buy more to hedge against rising costs, while others pay more for mortgages and credit card debt.

At the point of terminal hyperinflation, the velocity of money continues to rise, and central banks must respond by creating new money (currency) out of thin air to avoid liquidity lockups (not enough currency available for daily operations), fueling inflation and leading to the final days and hours of a fiat debt-based currency system. 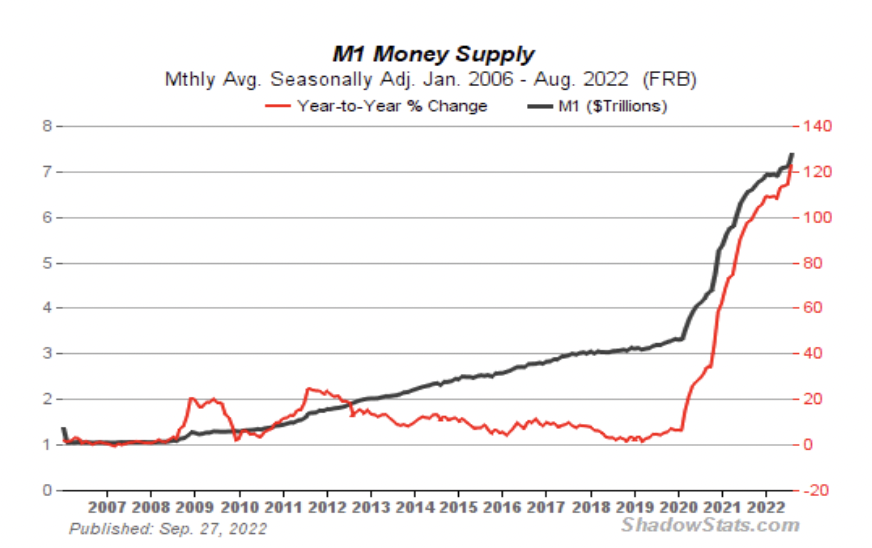 What we are seeing above is a Canary dying to tell us that a dollar crisis is in progress and a not-so-early warning that it is time to position yourself for safety going forward.

Rate Raising Is Not Going To Stop Inflation

The private corporation fronting as an agency of the US federal government, the Federal Reserve, is neither federal nor in possession of any reserves.

Raising interest rates at this point, especially without any coincident reduction in spending, cannot save the dollar.

With over 300 Trillion, including unfunded obligations, in debt and another $5.3 trillion of spending for 2022, and then Americans were forced to give up their jobs and participate in the destruction of the US private economy on the pretense of a fabricated pandemic – it is clear the financial system was stabbed in the heart and left to bleed out.

Rising interest rates are part of the problem. Debt markets are already in trouble while increasing rates transfers more currency to interest payments and away from general commerce or, worse yet, causes bankruptcy and interest-sensitive investments to collapse.

Raising interest rates harms banks, and bank failures and bailouts are on the way.

Silver and Gold prices are tightly controlled and are not free market valuations.

Even with that being said, deflation in gold and silver prices compared to deflation in stock values or housing values over the past few months of seesawing bond yields show silver and gold holding their face value better and purchasing power overall.

Remember, gold and silver spot prices are rigged, and the market is forced to offset the rigging by adding premiums based on rigged prices representing supply and demand calculations.

See the numbers below for current gold and silver premium versus spot prices. Note silver is shining with premiums over 80% of spot prices.

The so-called housing boom was really a cash trap for inflation caused by a reckless monetary policy of the federal reserve.

House prices are similar to gold and silver. They are not investments but rather hedges and stores of wealth. The housing market bubbles seen over the past 30 years have been caused by central banking and are not indicative of investment returns on housing.

So, as the fed caused the price rises, it is now driving the deflation of housing prices. Expect a spectacular fall.

America's Housing Market Is in Trouble. Here's What To Expect Next

One Bank to Bust Them All

Just like the Lehman Brother’s collapse in 2008, it's only necessary for one large financial-related institution to fail, and then the empire built of money-from-nothing begins to fall.

There is talk now of Credit Suisse leaning toward bankruptcy, and of course, there is always the risk of one the most corrupt banks in the world, Deutsche bank, collapsing.

I think the banking system will fail, but I believe it will start with low-level smaller banks toppling to interest rate increases and loan defaults.

DEUTSCHE BANK: WILL THE BANKRUPTCY OF THE GIANT BANK LAUNCH A NEW WORLD CRISIS?

Manufacturing Failing During A Period of Inflation is Inflationary

US manufacturing falls to lowest level since May 2020

Today's financial collapse could have been predicted (and was) in 1913.

In 1913 a central banking cabal hijacked the US Constitutional system of money and credit, and the private corporation called the Federal Reserve was given control of the US Monetary system.

It is not possible for the systematic collapse of all financial systems in the 1st world without a central, cartel banking system perched on the main trunk lines of economic energy.

The moving of money and wealth around the world is controlled by one central monstrosity, which is now trying to destroy the current socio-political paradigm to bring in their new one – a system of pure slavery for humanity.

Look, folks, it is their system, built to control, just like the Internet was created by them, the medical system, the universities, and the corporations that rule our lives. All things were built with One World Government – out of thin air capital – stolen from the people through taxation and debt currencies.

We must build our own. Competitive markets solve almost all problems.

We can see this as all bad or see it as an opportunity.

We can think for ourselves and in our best interests, and that will, by natural law, be in the best interest of all of us.

We can all live free of enslavement by being committed to the idea.

Do not do as you are told; stand against the new digital currency.

Become your own bank holding and trading in tangible assets and competing currencies. Reject the idea of central banking vehemently and reject central planning/control of any kind.

When the right moment appears, we will take back what is ours.